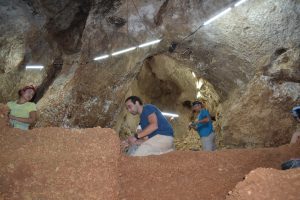 LOUISVILLE, Ky. – Modern humans arrived in the westernmost part of Europe 41,000 – 38,000 years ago, about 5,000 years earlier than previously known, according to Jonathan Haws, Ph.D., professor and chair of the Department of Anthropology at the University of Louisville, and an international team of researchers. The team has revealed the discovery of stone tools used by modern humans dated to the earlier time period in a report published this week in the journal Proceedings of the National Academy of Sciences. 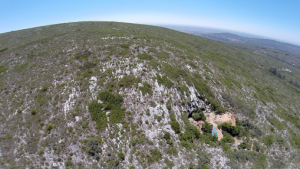 An aerial view of Lapa do Picareiro in central Portugal. Photo by Jonathan Haws.

The tools, discovered in a cave named Lapa do Picareiro, located near the Atlantic coast of central Portugal, link the site with similar finds from across Eurasia to the Russian plain. The discovery supports a rapid westward dispersal of modern humans across Eurasia within a few thousand years of their first appearance in southeastern Europe. The tools document the presence of modern humans in westernmost Europe at a time when Neanderthals previously were thought to be present in the region. The finding has important ramifications for understanding the possible interaction between the two human groups and the ultimate disappearance of the Neanderthals.

Until now, the oldest evidence for modern humans south of the Ebro River in Spain came from Bajondillo, a cave site on the southern coast. The discovery of stone stools characterized as Aurignacian, technology associated with early modern humans in Europe, in a secure stratigraphic context at Picareiro provide definitive evidence of early modern human arrival.

“Bajondillo offered tantalizing but controversial evidence that modern humans were in the area earlier than we thought,” Haws said. “The evidence in our report definitely supports the Bajondillo implications for an early modern human arrival, but it’s still not clear how they got here. People likely migrated along east-west flowing rivers in the interior, but a coastal route is still possible.”

“The spread of anatomically modern humans across Europe many thousands of years ago is central to our understanding of where we came from as a now-global species,” said John Yellen, program director for archaeology and archaeometry at the National Science Foundation, which supported the work. “This discovery offers significant new evidence that will help shape future research investigating when and where anatomically modern humans arrived in Europe and what interactions they may have had with Neanderthals.” 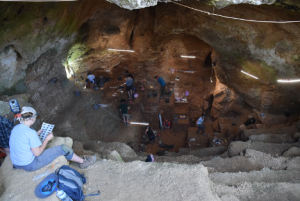 View of Lapa do Picareiro looking in from the entrance. Photo by Jonathan Haws.

The Picareiro cave has been under excavation for 25 years and has produced a record of human occupation over the last 50,000 years. An international research team from the Interdisciplinary Center for Archaeology and Evolution of Human Behavior (ICArEHB) in Faro, Portugal, is investigating the arrival of modern humans and extinction of Neanderthals in the region.

With support from U.S. National Science Foundation grants to Haws and Benedetti, the team has uncovered rich archaeological deposits that include stone tools in association with thousands of animal bones from hunting, butchery and cooking activities.

Sahra Talamo of the University of Bologna, Italy, and the Max Planck Institute for Evolutionary Anthropology in Leipzig, Germany, joined the research team to determine the age of the early modern human and Neanderthal occupations. She used state-of-the-art bone pretreatment and accelerator mass spectrometry (AMS) to date the bones that show evidence of butchery cut marks and intentional breakage by humans to extract bone marrow, a highly prized and nutritious food consumed by ancient people. The dating results place the modern human arrival to the interval between 41,000 and 38,000 years ago. The last Neanderthal occupation at the site took place between 45,000 and 42,000 years ago.

“The radiocarbon results from Lapa do Picareiro are not only very precise in terms of the dating method, but also demonstrate the meticulous work of the archeologists at the site,” Talamo said. “The importance of collaboration between the radiocarbon specialist and the archaeologists is essential in order to obtain an accurate chronology like in the case of Picareiro.” 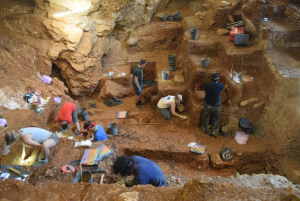 View of the excavation of the early modern human (foreground) and Neanderthal layers (background). Photo by Jonathan Haws.

Spatial analysis of high-resolution three-dimensional data confirmed the precise stratigraphic relationships between artifacts and radiocarbon samples and revealed discrete layers of occupation at the site.

This was backed up by artifact refitting that showed the stone tools were not moved through post-depositional processes.“Refitting is a task that requires a lot of time and patience, and in this case, it really was worthwhile because the results verified the geospatial observations,” said Pereira, an archaeologist who specializes in stone technology.

“If the two groups overlapped for some time in the highlands of Atlantic Portugal, they may have maintained contacts between each other and exchanged not only technology and tools, but also mates. This could possibly explain why many Europeans have Neanderthal genes,” said Bicho, director of ICArEHB. 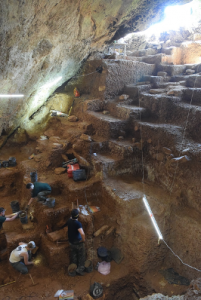 View of the excavation looking back towards the cave entrance. Photo by Jonathan Haws.

“Besides genetic and archeological evidence, high-resolution temporal context and fossil evidence across the continent is crucial for answering this question. With the preserved key layers dated to the transitional period, we are now awaiting human fossils to tell us more about the nature of the transition,” Friedl said.

Despite the overlap in dates, there does not appear to be any evidence for direct contact between Neanderthals and modern humans. Neanderthals continued to use the same stone tools they had before modern humans arrived, bringing a completely different stone technology.

“Differences between the stone tool assemblages dated before and after about 41,000 years ago are striking at Picareiro,” said Cascalheira an ICArEHB board member and specialist on stone tool technology. “Older levels are dominated by quartzite and quartz raw materials and marked by the presence of Levallois technology, a typical element of Neanderthal occupations in Europe. Aurignacian levels, on the other hand, are dominated by flint and the production of very small blades that were likely used as inserts in arrow shafts for hunting.”

Flint also was used to make tools for butchering animals such as red deer, ibex and possibly rabbits. The team recovered a few red deer canine teeth, often used as personal adornments, but so far these do not show traces of manufacturing jewelry.

“The bones from Lapa do Picareiro make up one of the largest Paleolithic assemblages in Portugal, and the preservation of these animal bones is remarkable,” said Milena Carvalho, a Ph.D. candidate at the University of New Mexico and ICArEHB researcher studying the diets and paleoecology of Neanderthals and modern humans. “The collection will provide tremendous amounts of information on human behavior and paleoecology during the Paleolithic and we will be studying it for decades.”

The cave sediments also contain a well-preserved paleoclimatic record that helps reconstruct environmental conditions at the time of the last Neanderthals and arrival of modern humans. 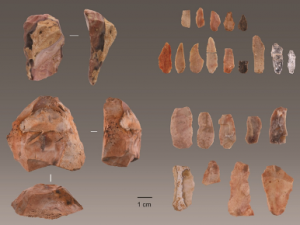 “We studied changes in the size of limestone clasts and the chemistry of muddy fine sediment filling the cave to understand the paleoclimatic context for the transition,” Benedetti said. “Our analysis shows that the arrival of modern humans corresponds with, or slightly predates, a bitterly cold and extremely dry phase. Harsh environmental conditions during this period posed challenges that both modern human and Neanderthal populations had to contend with.”

The cave itself has an enormous amount of sediment remaining for future work and the excavation still hasn’t reached the bottom.

“I’ve been excavating at Picareiro for 25 years and just when you start to think it might be done giving up its secrets, a new surprise gets unearthed,” Haws said. “Every few years something remarkable turns up and we keep digging.”

This website uses cookies to improve your experience while you navigate through the website. Out of these cookies, the cookies that are categorized as necessary are stored on your browser as they are essential for the working of basic functionalities of the website. We also use third-party cookies that help us analyze and understand how you use this website. These cookies will be stored in your browser only with your consent. You also have the option to opt-out of these cookies. But opting out of some of these cookies may have an effect on your browsing experience.
Necessary Sempre activado
Necessary cookies are absolutely essential for the website to function properly. This category only includes cookies that ensures basic functionalities and security features of the website. These cookies do not store any personal information.
Non-necessary
Any cookies that may not be particularly necessary for the website to function and is used specifically to collect user personal data via analytics, ads, other embedded contents are termed as non-necessary cookies. It is mandatory to procure user consent prior to running these cookies on your website.
GUARDAR E ACEITAR